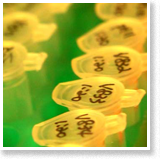 As part of an academic medical center, Feinberg strives to quickly apply our breakthroughs in laboratory research into clinical practice. Researchers at Feinberg are supported by the Northwestern University Office for Research, the Feinberg Research Office and a network of more than 60 research core facilities on both campuses. Research is conducted in all Feinberg departments, institutes, and centers.

In 2016, Feinberg ranked 16th in the National Institutes of Health (NIH) funding rankings among all American Medical Schools, up from 39 in 2001.

Fourteen departments at Feinberg ranked among the top 10 in their specialty in their discipline in a list of National Institutes of Health (NIH) funding to medical schools. They are: Public Health (Preventive Medicine and Medical Social Sciences) (1), Urology (2), Obstetrics and Gynecology (2), Cell and Molecular Biology (3), Physical Medicine and Rehabilitation (3), Dermatology (6), Neurology (5) Physiology (8), Neurosurgery (8), Surgery (9) and Pharmacology (10).

An additional two departments rank in the top 20: Internal Medicine and Geriatrics (17) and Otolaryngology (17).

The Feinberg School of Medicine has approximately 1,155,000 net square feet of space, of which just over 645,000sf is dedicated to research.  This total includes over 120,000sf of wet lab space renovated within the last five years, and 100,000sf of newly-acquired dry lab research space over the same time period.  Since 2009, Feinberg has invested more than $150,000,000 in renovating more than 400,000 net square feet of owned and leased space.

Northwestern University broke ground on the Louis A. Simpson and Kimberly K. Querrey Biomedical Research Center building May 8, 2015. The building will double vivarium capacity and house laboratories for both Feinberg and The Stanley Manne Children’s Research Institute, the research arm of the Ann and Robert H. Lurie Children’s Hospital of Chicago. The initial phase of construction will involve nearly 600,000 gross square feet, designed for future expansion to a total of 1.2 million square feet. Completion of the initial phase is scheduled for late 2018.

For academic year 2015-2016, the year for which information is currently available: